Saturday Night at the Ritz.

Well, not really the Ritz, but the Bangalore equivalent: the Hotel Oberoi. My friend from work (also traveling from the US to India) and I decided to stay there on Saturday night (at the “reduced” weekend rate). In Bangalore there’s not much available in between two star and five star hotels. Since we were staying at the former during the week, we figured one night at the latter balanced everything out, expenses-wise. When we checked in we were also upgraded to suites, I guess the weekend is slow for them.

For contrast, here are pictures of where I stay during the week (the “Indie One”) and the Hotel Oberoi: 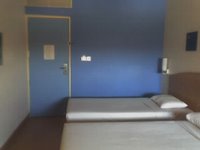 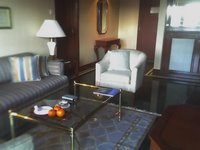 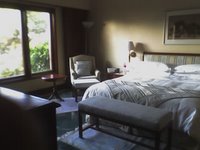 We walked over to have a drink at the famous “ice bar” at the adjecent Taj Residency hotel. The signature drink was a test tube full of creme liqueurs, sitting in a iced vodka chaser. Very fancy.

I also ordered a “singapore sling” since I kept seeing it on the airline menu (from Singapore Airlines). Turned out it was a fru-fru drink with a little umbrella. I drank it anyway. It was actually pretty good.

For dinner we ate at the Taj hotel. When we ordered wine (I let my friend order since he’s a winophile), he asked for a Chianti they had on the menu. Turned out they were out, so he asked the Matre’d for comperable wine. He suggested a Chardonnay (true, it also started with a “c”), but we decided to go with a Sangiovese instead. Drinking wine in India is always a little adventure.

All in all, a fine saturday night. On the slightly scary side, here’s a picture of the hotel courtyard when they spray for mosquitoes around 7:00. You can see the cloud of spray coming up through the trees. They don’t fool around in India. 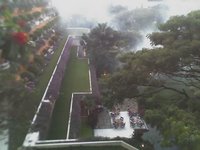